Uniaxial, or one-dimensional, material models are the work horses of OpenSees. Originally developed for the truss element, these models have proliferated thanks to fiber section models. However, because they are simply scalar functions, UniaxialMaterial models can be used in several other contexts. 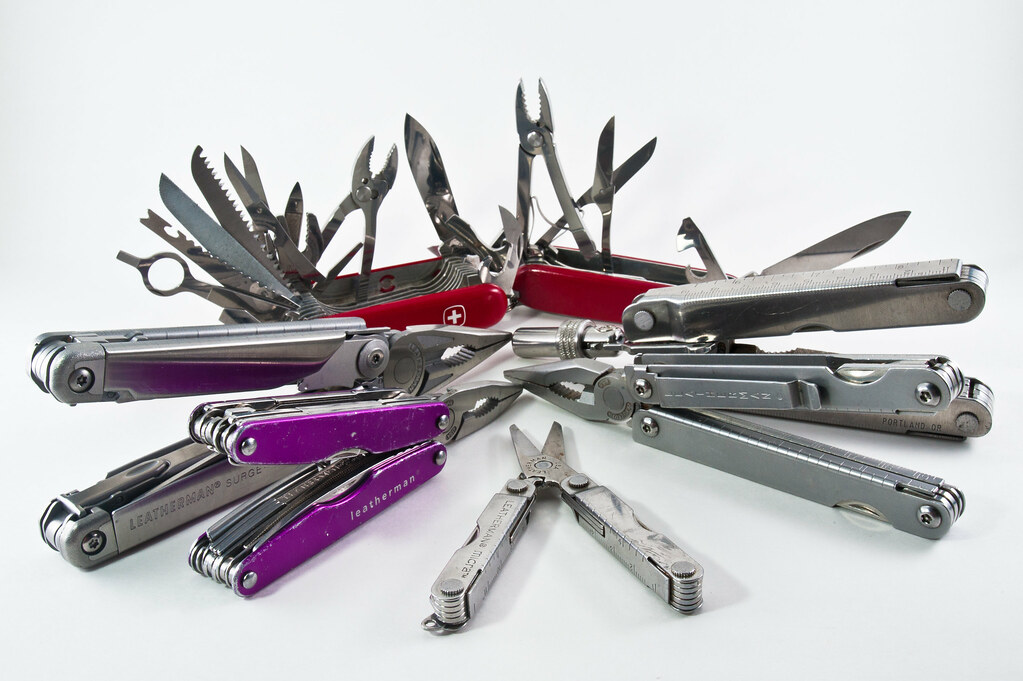 “Multi Tools” by pennuja is licensed under CC BY 2.0

This post summarizes the contexts in which UniaxialMaterial models are used in OpenSees along with the interpretation of the model input and output.

A Truss element uses UniaxialMaterial models as stress-strain response. The material stress and tangent are multiplied by cross-section area to get force and stiffness. For linear-elastic response, use E in an ElasticMaterial, and for nonlinear response use, stress parameters, e.g., as shown below for HardeningMaterial, or for whatever uniaxial material model you like.

Along the same lines, FiberSection objects use UniaxialMaterial models as stress-strain response. The material stress and tangent are multiplied by fiber area to get fiber force, which is summed over the section to get stress resultants (axial force and bending moment).

A SectionAggregator uses UniaxialMaterial models as section force-deformation (stress resultant) response. There is no integration of the model response, i.e., no automatic multiplication by area, so the user has to input resultant quantities of section stiffness and force.

A ZeroLength element uses UniaxialMaterial models as force-deformation and moment-rotation response, basically as springs. There is no integration of the model response, so the user has to input force (or moment) and stiffness.

The zero length elements are often used as moment-rotation springs in concentrated plasticity beam elements where the interpretation is (force*length)/radian. There are also a few variants on the zero length element that use UniaxialMaterial models: twoNodeLink and flatSliderBearing among others.

Most of the OpenSees documentation refers to UniaxialMaterial models as stress-strain relationships, but know that these models can do so much more! Also, be careful not to use a UniaxialMaterial in odd contexts, e.g., it wouldn’t make sense to use Concrete23 in a section aggregator or zero length element.

I have been involved in the development, maintenance, and growth of OpenSees since its early days. I am interested in learning Python and improving my academic writing. View all posts by Michael H. Scott

Launch an OpenSees AMI on Amazon EC2. No install. No compile. Start running OpenSees with up to 384 GB RAM and 96 CPUs in a matter of minutes!

Are you a professional engineer looking to integrate OpenSees in your consulting projects? Check out the Services offered by Portwood Digital, LLC.

Copyright
© 2019-2022. Michael H. Scott, Portwood Digital, LLC. All rights reserved.
This site is not affiliated with Oregon State University, University of California, PEER, or any other institution.