So, after some intense navel gazing, I decided that two discarded wrappers was enough waste to be recycled in to a new post. 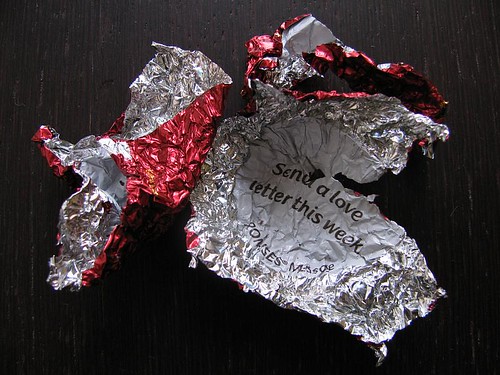 “send a love letter this week” by stevendamron is licensed under CC BY 2.0

The first discarded wrapper is PenaltyMaterial, which adds a small stiffness to its wrapped UniaxialMaterial object. This wrapper can help you avoid a singular stiffness due to perfect plasticity and is a downsized approach to putting the wrapped material in parallel with an ElasticMaterial.

I could not find the source code for PenaltyMaterial anywhere, even on this Zip disk. I did, however, find Tcl input files where I used the wrapper.

No source code, no problem–re-coding the PenaltyMaterial was easy. Below is an example with the penalty stiffness equal to 5% of the initial stiffness; although when using this wrapper you’ll want to specify a much smaller value.

The second discarded wrapper is MultiplierMaterial, which multiplies the stress and tangent of the wrapped UniaxialMaterial object by a factor. This wrapper can be used to apply overstrength factors to materials and p-y multipliers for shadowing effects in pile groups. An example is shown below with a multiplier of 0.8.

The class tag for MultiplierMaterial first appeared on line 130 of classTags.h with this commit in January 2018. Fortunately, I located the source code for this wrapper.

I put both wrappers in GitHub for safekeeping with pull request #407. If either of these wrappers sounds useful to you, please let me know and I’ll get the input commands checked in. I would do it now, but my fork of OpenSees is kinda in disarray at the moment.

I have been involved in the development, maintenance, and growth of OpenSees since its early days. I am interested in learning Python and improving my academic writing. View all posts by Michael H. Scott

One thought on “Discarded Wrappers”

Launch an OpenSees AMI on Amazon EC2. No install. No compile. Start running OpenSees with up to 384 GB RAM and 96 CPUs in a matter of minutes!

Are you a professional engineer looking to integrate OpenSees in your consulting projects? Check out the Services offered by Portwood Digital, LLC.

Copyright
© 2019-2023. Michael H. Scott, Portwood Digital, LLC. All rights reserved.
This site is not affiliated with Oregon State University, University of California, PEER, or any other institution.